A massive cyber attack has struck across the five continents. Criminal hackers working under the pseudonym of “SPECTRE” have infiltrated the digital infrastructure of a large number of major cities around the world. With paralysis and mayhem spreading, you and your colleagues have been called together to start the fight back. It’s time to see if you are up to hack the hackers!

To cover their access, SPECTRE’s cyber attack has locked the electronic control centre of each city with a cunning puzzle. Crack this puzzle and SPECTRE’s grip on the city is broken.

Working in teams up to 8 people connected using video conferencing, players access a secret website with a set of intriguing codebreaking puzzles – each puzzle locks one city. Working as a team, puzzles can be tackled in any order. Puzzles are categorised by city, by difficulty and by nature. In this way, there is plenty to engage everyone in the team.

As puzzles are solved, cities are liberated and points scored. As the pursuit of SPECTRE reaches a finale, clues to the gangs secret hideaway are uncovered. This gives switched-on teams a chance to strike directly at SPECTRE and score big bonus points. Let’s rid the world of this evil outfit once and for all!

Solving puzzles while working as a team on a competitive and thought-provoking activity is inherently fun! You’ll guests will love the competitive element and feel-good factor of working together to crack codes. Cyber Attack is our best-selling virtual team games.

Get a quotation for this group event now!

What will be remembered 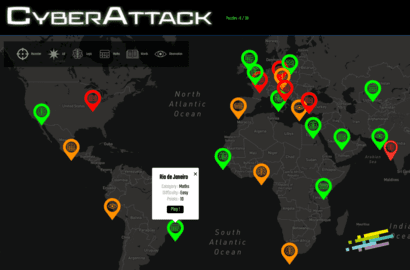 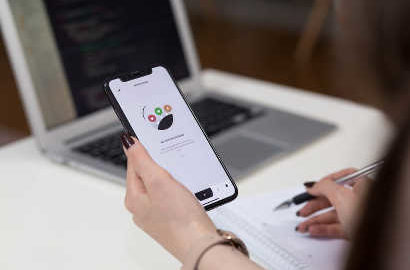 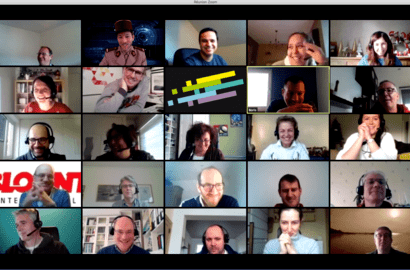 We all spent a fantastic time with Cyber Attack. I strongly recommend. This online game is perfect for team cohesion. Thanks a lot!

Cyber Attack is a very fun and clever online teambuilding event with a various puzzle allowing everyone to engage.

CyberAttack can be played on most devices. We recommend laptop, desktop or tablet. In addition, one member of each team taking part will need to download and install a game app (Loquiz) to their smartphone. When you finish your game you can safely uninstall the app. No personal data is collected or stored.

You need a reliable internet connection both to connect virtually to your team members and to the game.

This game can be run with your favorite meeting solution: we use Zoom / Meet / Teams / Remo / Airmeet.

This website uses cookies to improve your experience while you navigate through the website. Out of these, the cookies that are categorized as necessary are stored on your browser as they are essential for the working of basic functionalities of the website. We also use third-party cookies that help us analyze and understand how you use this website. These cookies will be stored in your browser only with your consent. You also have the option to opt-out of these cookies. But opting out of some of these cookies may affect your browsing experience.
Necessary Toujours activé
Necessary cookies are absolutely essential for the website to function properly. This category only includes cookies that ensures basic functionalities and security features of the website. These cookies do not store any personal information.
Non-necessary
Any cookies that may not be particularly necessary for the website to function and is used specifically to collect user personal data via analytics, ads, other embedded contents are termed as non-necessary cookies. It is mandatory to procure user consent prior to running these cookies on your website.
Enregistrer & appliquer